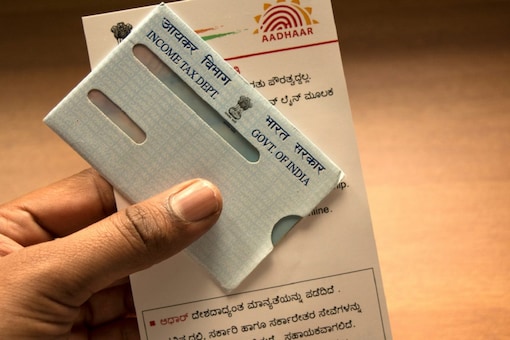 PAN-Aadhaar Linking Deadline: The Income Tax department under the central government has notified an extension in the task to link PAN-Aadhaar for citizens.

The Central Board of Direct taxes, or CBDT has extended the deadline to link PAN-Aadhaar to March 31, 2023, but this comes with a price.

Those who are linking their PAN-Aadhaar at this time will have to pay a fine while completing this mandatory work.

PAN-Aadhaar Linking: What Does Govt Say in its Order?

“Every person who, in accordance with the provisions of sub-section (2) of section 139AA, is required to intimate his Aadhaar number to the prescribed authority in the prescribed form and manner, fails to do so by the date referred to in the said sub-section, shall, at the time of subsequent intimation of his Aadhaar number to the prescribed authority, be liable to pay, by way of fee, an amount equal to, — (a) five hundred rupees, in a case where such intimation is made within three months from the date referred to in sub-section (2) of section 139AA; and (b) one thousand rupees, in all other cases,” states the latest CBDT order dated March 30 this year.

There are many ways you can link PAN with Aadhaar. For one, you can do it online in two ways — without logging in to the income tax portal or by logging into your account.

You have to enter your PAN and Aadhaar details to link them, along with other required details.

Apart from these methods, you can also link your Aadhaar card to your PAN card via SMS thanks to the Aadhaar issuing authority Unique Identification Authority of India’s (UIDAI’s) new updates.

The linking process can be done by sending an SMS to either 567678 or 56161 from your registered phone number.

What Happens if You Miss PAN-Aadhaar Linking Deadline

The government has time and again made it clear that linking Aadhaar and PAN is a mandatory thing to do, and will help the authorities to curb frauds.

Therefore, the Centre is in no mood to change the present stand and there will be consequences if you do not link PAN-Aadhaar by March 31 next year.

In case of failure to intimate the Aadhaar Number by the last extended notified date, that is, March 31, 2023, the PAN allotted to the person shall be made inoperative in accordance with the provisions of the Act, the CBDT said in its order.

An inoperative PAN will lead to a number of consequences like not being able to file tax return, pending returns and refunds not being processed, tax deductions at a higher rate and many others. Thus, PAN-Aadhaar linking is an important task.

Share
Facebook
Twitter
Pinterest
VK
WhatsApp
Previous articleThis Electric Car Will Run For 7 Months With Single Charge! Solar Power Is The Secret & This Can Change Everything!
Next articleUP Board 10th and 12th Result 2022: When and where to check the results
- Advertisement -