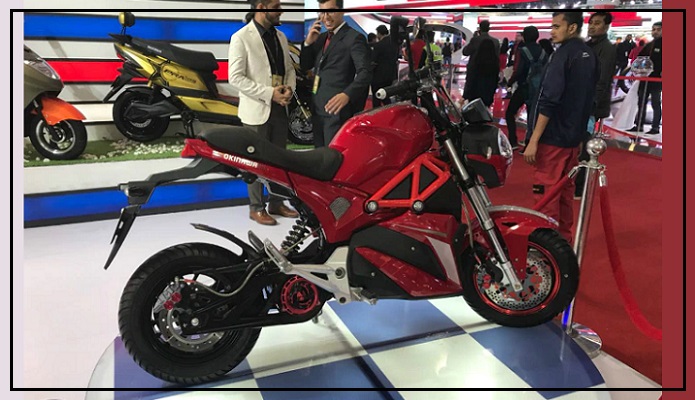 Headquartered in Gurgaon, automaker Okinawa has produced electric two-wheelers since 2015.

With multiple e-scooters to choose from, the company has emerged as one of the leading names in the highly competitive Indian electric two-wheeler segment.

The company is now on the verge of releasing its electric bike, the OKHI100.

Although the e-bike was originally shown off in 2018 and 2020, its arrival was delayed due to the onset of the COVID-19 pandemic.

The OKHI100 would be the company’s first electric bike after producing mostly electric scooters, as E-Vehicle Info points out.

At first glance, the OKHI100 has a sporty design with a significantly lifted tail.

Motorbike enthusiasts will note the Red variant of the e-bike (pictured below) bears some resemblance to Ducati and even KTM superbikes.

The manufacturer is settling for halogen lamps on the front while abundant LEDs are onboard.

Given that the e-bike was first introduced four years ago, it’s likely that a lot of the hardware will be different when the e-bike is launched next year.

We know it uses a lithium-ion battery pack underneath, which should be capable of running for at least 150 kilometers on a full charge.

Interestingly, the OKHI100 will not use a hub motor, relying instead on a frame-mounted electric motor.It will reportedly have a top speed of 100 kmph.

This is in line with the company’s claims that the OKHI100’s performance will be on par with standard 125cc fuel-based motorcycles.

As per the manufacturer, the OKHI100 can fully recharge from 0 to 100% in 2 hours, which makes it an ideal choice for city commuting.

Okinawa has revealed that the OKHI100 will officially arrive by March 2023, so we’re still far from seeing it in action.

While there’s no clarity on the official pricing of the vehicle, the OKHI100 could cost anywhere between Rs 1 lakh to Rs 1.5 lakhs at the time of release.

Of course, there’s every possibility that the company could surprise us all with a lower-than-expected price come March 2023.

Ola and Uber to discontinue it’s Services in THIS Indian City:...