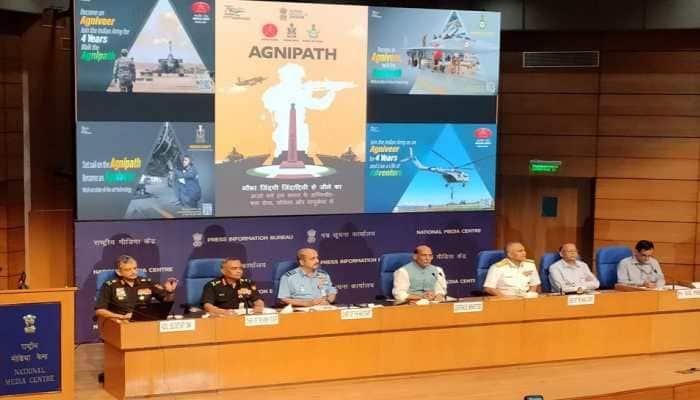 Under this, Indian youth would be granted an opportunity to get inducted into the Armed services,” on Tuesday (June 14) at a press conference in Delhi.

Underling the important features of the newly launched recruitment scheme, Defence Minister said the scheme will raise the employment opportunities by harnessing myriads of skills from various sectors.

“Under the ‘Agnipath’ scheme, efforts are to create a youthful profile of the Armed forces. It would help to train them for new technologies & also improve their health levels.

“We are looking at the best to serve the armed forces between the ages of 17.5 to 21 years. Once selected, Agniveers (candidates) will serve for 4 years with us.”

“On completion of 4 years, Agniveers will get an opportunity to apply voluntarily for the regular cadre. Based on merit, organisation requirement, up to 25% shall be selected from that batch” Lt Gen Puri informed further.

“We will provide an opportunity to the youth to serve the nation for a short and long duration, as Agniveers…We are giving youth a chance for both long and short duration military service,” he added.

Chief of Air Staff Air Chief Marshal VR Chaudhari while mentioning the fast-changing world and warfare talked about the aim of the scheme which is to employ such youth in the air force who adapt to the new technologies seamlessly.

“The IAF is looking to tap into the youth’s ability to adapt to a fast-changing technology-based environment, train and expose them to the high-tech environment of the IAF and hone their skills for future employment,” he said

“Agnipath scheme is a new idea of the new era. An idea that is made in India and made for India.

An idea that will have a positive impact on the human resources management of armed forces,” said Indian Navy chief Admiral R Hari Kumar sharing his thoughts on the Agnipath recruitment scheme.

He also informed that women will also be selected through the scheme and the Indian Navy which right has only women officers will also have sailors in the organisation.

Army chief Gen Manoj Pande underlining the transparency and fair selection criteria of the scheme said,  “the screening and selection based on a sound, fair, transparent and a robust assessment system will ensure that the Army retains the best of the best for a longer serving duration and these personnel will form the core of our organisation.”

Travelling To US? A Big Change In Rules For Arrivals